We're experiencing higher than usual call volume. You can also email us at hello@acionecall.com or chat with the OneCall Team, using the button on the right side of the screen. We appreciate your patience! close

ACI appraisers love our new ACI Sky™ Maps – fast, friendly and great looking! Thanks so much for all the positive feedback, it is clear that our switch to Google Maps™ was a great move.

If you’re still using the MapPoint eService you will need to upgrade right away as the older map service will be discontinued at the end of March. To upgrade your system go to Help > ACI WebUpdate and follow the installation instructions.

Thank you! Sky Maps is sooo much better than the old location maps. Again, thank you for the great improvement in mapping. It is so easy to use, saves so much time.”

With the release of ACI Sky™ Maps we’ve had several questions from appraisers ranging from settings to functionality. Below are a few of the most common questions and answers.

Q: How can I see the map before it’s imported into the map page?
A: By clicking the Preview button, you can inspect what your map will look like prior to import. 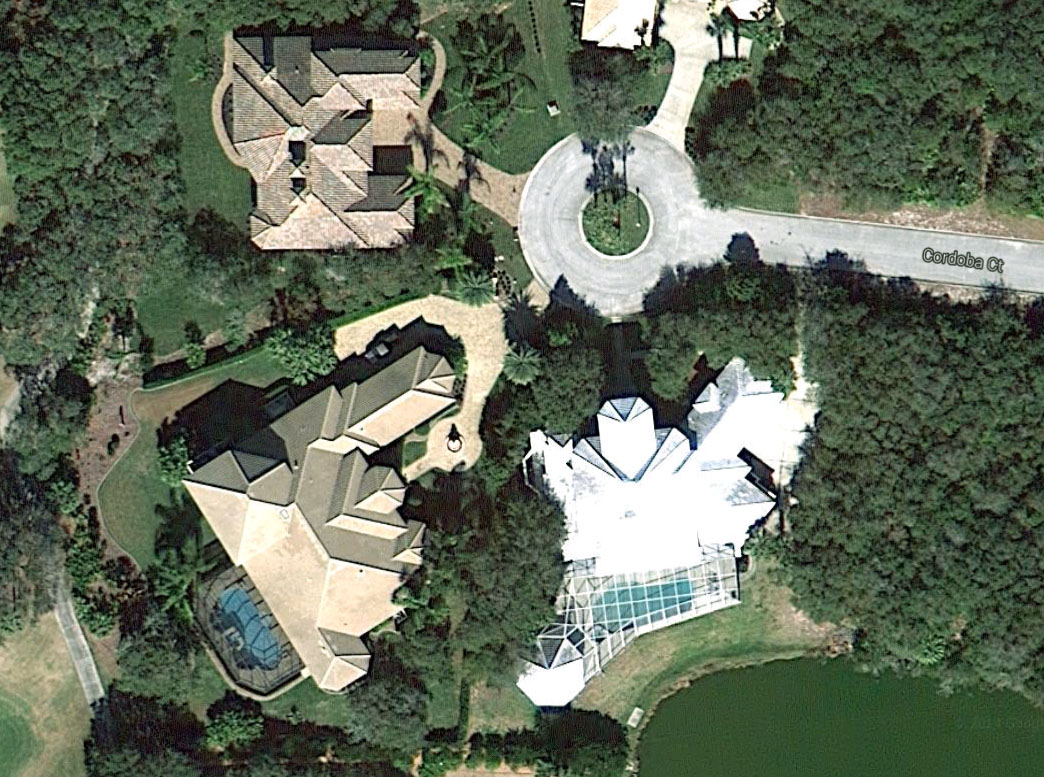 Q: How do I pan and zoom within the location map?
A: Pan by holding down your cursor and dragging the map. Zoom by selecting the Zoom In/Out buttons or with the scroll wheel on your mouse.

Q: How do I move the map locator and its label?
A: Hover over the locator until the cursor changes to a pointer. Click and drag the locator then release your mouse to snap it in place. Move the label in the same fashion. 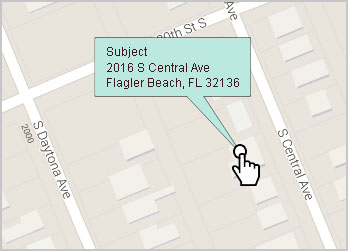 Q: How do you set the default map colors?

A: Set your default color options by going to eServices > Options > Mapping > Sky Maps and click on the color swatch. Add a custom color by positioning the crosshairs on the color map, adjust the hue and select “Add to Custom Colors.” Select OK and the new color will be added to your swatches.

In the eServices Options you can also adjust how the proximity data displays and imports, the default Map Style (Road or Hybrid), Distance Unit and Country information. 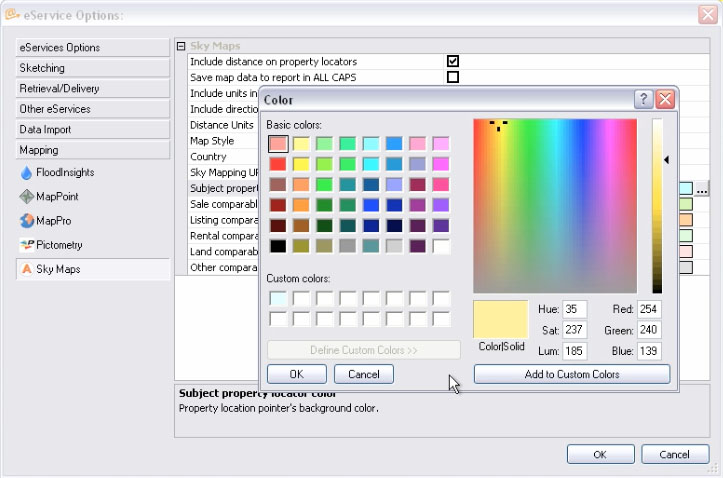 With the December 10, 2013 Lender Letter from the GSE’s and new UCDP review requirements, consistency in reporting is essential in maintaining UAD compliance. Using ACI Research™ for storing and importing comparable property data saves time and ensures that you are reporting a property’s Quality and Condition ratings consistently.

Set ACI to automatically export comparable data to Research every time you enter a new property by going to Options > Environment > Integration. Check the box for Update Comps Database on Close. Once you’ve built up a database of properties, import comps by going to Comps > Import From ACI Research. Data from your last search will be auto filled. Click Clear on the bottom to remove all inputs. Add search criteria to narrow down your comps search.

Auto-Replace allows you to create custom keyboard shortcuts for things like design styles, neighborhoods, and other information that you commonly type. This tool is great for those words you always seem to misspell too. Just add the misspelling and set up the correct replacement word to lessen keystroke errors!

For visual instruction, view this 2-minute video on how to Automatically Replace Text in ACI Report™.

Create Linked Common Responses to quickly fill in sections of your appraisal report. Portions of the comps grid and neighborhood section are great candidates for a linked response.

PALM COAST, Fla. – ACI, a leading innovator in technology to the mortgage valuation industry, announced an e-learning series on the 2014–2015 Uniform Standards of Professional Appraisal Practice (USPAP). The online classes provide valuable educational opportunities for appraisers and industry professionals alike and were developed in response to the January 1, 2014, USPAP revisions.

Richard Heyn, SRA, and Dawn Molitor-Gennrich, SRA — both certified as USPAP instructors by the Appraiser Qualifications Board (AQB) — are the developers and presenters of the three-part e-learning series. The USPAP-specific sessions cover the rationale and revisions to the Definitions, Preamble, Ethics and Competency Rules, Standards Rule 3–5, reporting option changes in Standard 2, and revisions to the accompanying Advisory Opinions. The series will start in January and run through May.

"We recognize that appraisal professionals have specific questions concerning the updated USPAP requirements and how those changes affect their appraisal and review assignments," said George Opelka, senior vice president at ACI. "We continue to invest in training, education, and strategic relationships to ensure that ACI appraisers have access to the best technical and knowledge resources available."

"The primary objective here is to help ACI clients easily adapt their practice and maintain USPAP compliance," said Richard Heyn. "Given the webinar’s live format, no two sessions are exactly the same, so we encourage ACI users to attend as often as they find helpful."

For more information or to register for an upcoming USPAP e-learning session, please visit http://www.aciweb.com/uspap-webinars/. In addition to the web series, on June 23, 2014, ACI will present a live seven-hour USPAP update course for FREE (course material not included) at Valuation Expo 2014 in Las Vegas. ACI’s AQB-certified USPAP instructors Richard Heyn, SRA, and Dawn Molitor-Gennrich, SRA, will teach the update course. All Valuation Expo registrants are eligible to attend. Continuing education credit for the seven-hour update course is dependent on the state in which an appraiser is licensed. Please visit http://www.valuationexpo.com/register for details and registration information.

About ACI
ACI, a pioneer in crafting technology solutions for the mortgage valuation community, has gained industrywide recognition and support from leaders in the field. ACI’s highly scalable appraisal solutions are tailored to the needs of the organizations ACI serves. The ACI client base features many of North America’s premier lenders, national appraisal companies, and real estate brokerage firms. From connecting appraisers nationwide to streamlining quality control, ACI enables organizations to process appraisals and manage exceptions in a consistent and efficient manner. Headquartered in Palm Coast, Florida, ACI (www.aciweb.com) is a Verisk Analytics (Nasdaq:VRSK) company.

USPAP Changes and Your Appraisal Reports

Many appraisers have been asking questions related to the changes in the 2014-15 USPAP, especially how the changes relate to the new Reporting Options, gPAR forms, and the USPAP Addendum.

What can you tell me about the new Reporting Options?

Beginning January 14th, we’ll be doing a series of webinars for ACI on the 2014 changes to USPAP, but for now, we’ll deal with the basic question: “What do I need to revise in my reports to comply with the changes in the 2014-15 USPAP?”

The full explanation of the revisions to the type and number of Report Options can be found on page 8 of the Summary of Actions from the Appraisal Foundation, but here’s the short version.

Prior to the 2014-15 USPAP, there were three Report Options:

QUESTION: The Uniform Residential Appraisal Report form is identified as a “Summary Appraisal Report” in the first line of text where it states “The purpose of this summary appraisal report is to…” However, the 2014-15 USPAP no longer references “Summary” in the reporting section. Is it acceptable to continue using the present version of the URAR form?

ANSWER: If you are hoping the answer is “D” you are correct. You can continue to use the current URAR form (and the other Fannie/Freddie forms) without worrying about making ANY changes.

So the answer to the question “What do I need to revise in my reports (URAR, or any other current Fannie/Freddie forms) to comply with the changes in the 2014-15 USPAP?” is… NOTHING.

What about Restricted Appraisal Reports? (gPAR)

Fannie and Freddie do not have a Restricted Appraisal Report format. If you use what was formerly titled as the ACI gPAR series of Restricted Use reporting formats, those have been edited and new versions are available via WebUpdate. Click on the links below to view the new gPAR forms.

What about the USPAP Compliance Addendum?

The USPAP 2012 Addendum that was introduced last year required no changes, so ACI copied this form and created a new USPAP 2014 version. The 2012 version of the addendum, which formerly had three check boxes for the three report options (USPAP 2012 w/ Type), is retired and the new “USPAP 2014 w/ Type” has been added. The new addendum only includes the two new USPAP Reporting Options – Appraisal Report and Restricted Appraisal Report.

In a future blog, we’ll go into more detail on the topic of USPAP compliance addendum forms and how and when to best use them. In the meantime, make sure that what you state in the body of your reports is consistent with an “add-on” type addendum, such as a USPAP compliance form. Remember, forms don’t comply with USPAP, appraisers comply with USPAP.

How do I get the new forms?

To access the updated gPAR and USPAP forms, ensure that your support subscription is current and then run WebUpdate in ACI Report™. To renew your subscription, click here or contact ACI Sales at 800.234.8727.

Does ACI have any software to estimate the cost to produce an appraisal report?

A: The Reasonable Fee Calculator (RFC) is an estimation tool in ACI Report™. Use the RFC to calculate the Total Cost to produce an appraisal report prior to accepting an assignment or after the appraisal to have a retrospective on profit margin.

To get started, run WebUpdate, then create a new report and choose the Reasonable Fee Calculator report pak. Set your desired annual salary and make adjustments to account for your designation and experience. You can then add your operating costs and work-related expenses. Once complete, the RFC calculates your estimated “bottom-line” for an individual order.

This easy-to-use tool can help provide insight on the overall cost per job. You can also use it as a tool to calculate your effective pay rate when you accept an assignment at a fixed fee. 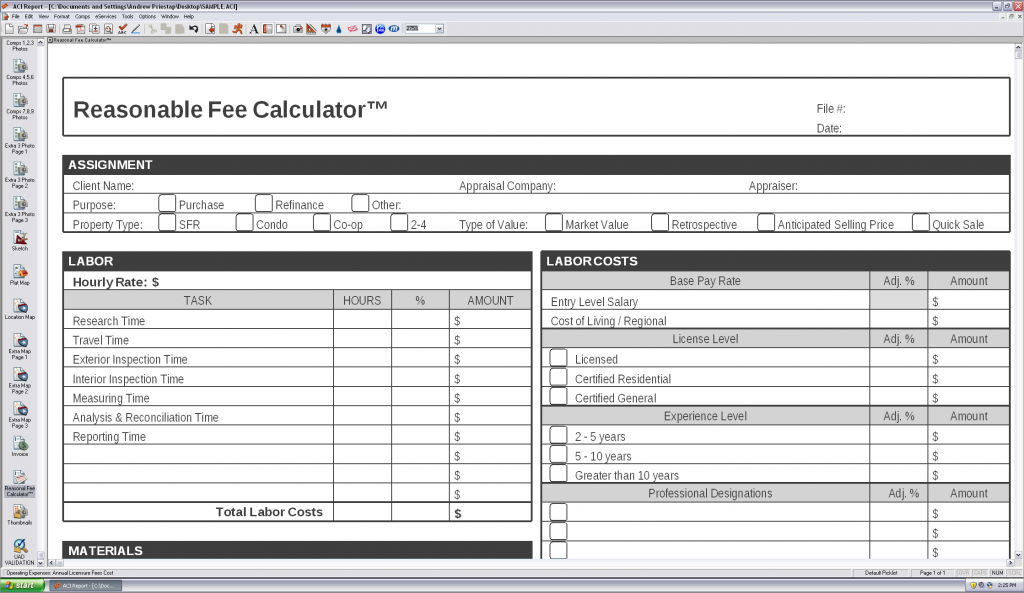 Click here for 132 additional video tips to help streamline your workflow. These are just a few examples of exclusive features you will only find in ACI software. We also offer live ACI Report webinars, for a broader look at features and functions.

I’m thinking about moving to Windows 8. Is there anything I need to know?

A: If you decide to upgrade to Windows® 8 or if you’re in the market for a new PC, know that ACI Report is compatible with the latest Windows operating system.*

To help you navigate through the new Windows 8 Modern UI Style, we’ve included some of the new keyboard shortcuts for your reference.

Click here for 132 additional video tips to learn more about ACI software, and improve your speed and efficiency. We also offer several live ACI Report webinars, for a broader look at features and functions.

*If your machine is on a network please call or e-mail Technical Support.

How do I crop a photo after I’ve imported the image into ACI Report?

A: All of the photo editing controls can be accessed by right-clicking on a photo or thumbnail in your report. From the menu select “Edit Image” to open the Image Edit window. To crop the image, simply select “Zoom,” then using your cursor, drag the mouse to select the area to crop. Click “OK” to use the selected area.

Click here for 132 additional video tips to learn more about ACI software, and improve your speed and efficiency. We also offer several live ACI Report webinars, for a broader look at features and functions.